Home Multiplication What is a movement

Definition of a spiritual movement and the Biblical example of the Church in Antioch (Acts 11, 13). The principles we can learn from this example and how can we apply this in our Student Led Movements today.

What is a movement?

Movements everywhere …
so that every student knows someone
who truly follows Jesus.

Definition of a spiritual movement

God working
Through a team
Of like-hearted Disciples
To Win, Build and Send
Toward the fulfillment of the Great Commission

The Church of Antioch is a good example of a spiritual movement.

Some of the believers who were scattered by the persecution which took place when Stephen was killed went as far as Phoenicia, Cyprus, and Antioch, telling the message to Jews only. But other believers, who were from Cyprus and Cyrene, went to Antioch and proclaimed the message to Gentiles also, telling them the Good News about the Lord Jesus. The Lord's power was with them, and a great number of people believed and turned to the Lord. The news about this reached the church in Jerusalem, so they sent Barnabas to Antioch. When he arrived and saw how God had blessed the people, he was glad and urged them all to be faithful and true to the Lord with all their hearts. Barnabas was a good man, full of the Holy Spirit and faith, and many people were brought to the Lord.

Then Barnabas went to Tarsus to look for Saul. When he found him, he took him to Antioch, and for a whole year the two met with the people of the church and taught a large group. It was at Antioch that the believers were first called Christians.

About that time some prophets went from Jerusalem to Antioch. One of them, named Agabus, stood up and by the power of the Spirit predicted that a severe famine was about to come over all the earth. (It came when Claudius was emperor.) The disciples decided that they each would send as much as they could to help their fellow believers who lived in Judea. They did this, then, and sent the money to the church elders by Barnabas and Saul.

In the church at Antioch there were some prophets and teachers: Barnabas, Simeon (called the Black), Lucius (from Cyrene), Manaen (who had been brought up with Governor Herod), and Saul. While they were serving the Lord and fasting, the Holy Spirit said to them, “Set apart for me Barnabas and Saul, to do the work to which I have called them.” They fasted and prayed, placed their hands on them, and sent them off.


We see here that the people in Antioch were open to receive the gospel. Christians from Jerusalem came all the way down to Antioch to share the Good News of Jesus Christ (evangelism). The church in Jerusalem sent Barnabas to help the new believers to grow in their faith. Barnabas needed help and brought Saul in. Together, Barnabus and Paul taught the new believers for a whole year (life-changing discipleship) and help them to grow in leadership. The result was that new leaders rose up and took responsibility (multiplying leaders). The new Church in Antioch was able to take care of itself, sent Barnabas and Saul to a new area to start a movement and even helped the church in Jerusalem with their needs (generating self-sustaining local resources).

From the Church of Antioch we see these four important elements:

In a Student Led movement, the emphasis will be on:

Evangelism
Get involved in an Action Group at the university and share the Gospel with your fellow students, using relevant and appropriate methods and materials.

Life-changing discipleship
Form a discipleship group with new believers (or other believing students) and study the basics (“Essentials”) and other principles from the Bible for spiritual growth. Take what you learn and apply it to your life.

Multiplying leaders
Study spiritual leadership principles from the Bible with other student leaders who are “FAT” (Faithful, Available and Teachable). Get coaching and help from staff and other students. Start your own Action Group at the university and take the lead to plan and run activities at your university.

Generating local resources
Generate the necessary resources (training, materials, money) together with other student leaders and staff to run the movement at your university and help other students at other universities to start movements.


Movements everywhere …
so that every student knows someone
who truly follows Jesus. 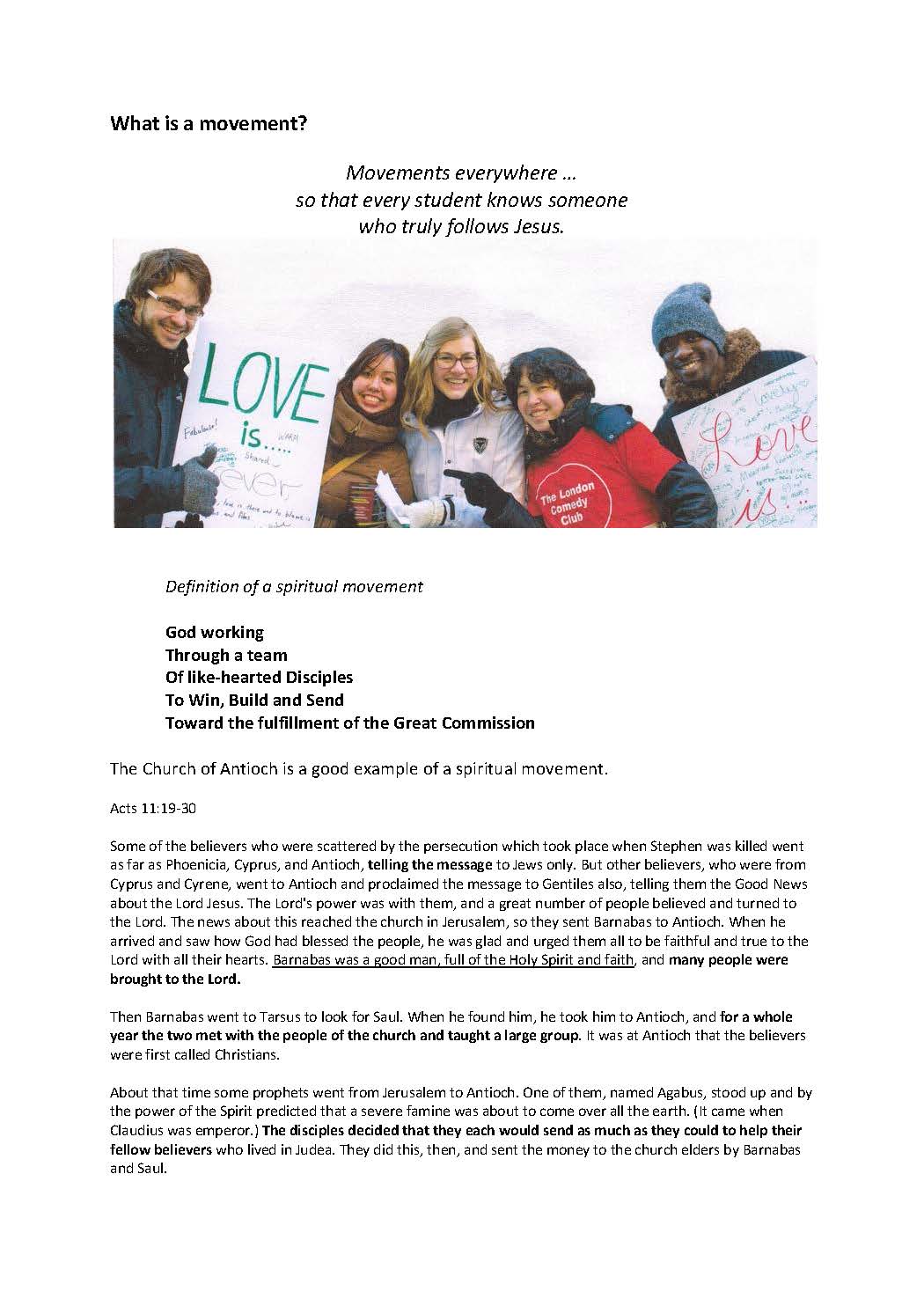